Rage Against The Screen (RATS) is a contemporary and trustworthy site for the most recent reviews for digital entertainment. Our Rage Scale gives you the fairest insight into films, TV etc. It is for the people, the Cinephilias and anyone who is in need of a quick and easy review.

What is the Rage Scale?

The Rage Scale is a rating of one person as of this moment; the reviewer is none other than me, the site owner Matt Carr. I believe in a fair and passionate rating of entertainment. I watch the film/series/video with an open mind, having gained an opinion at the end of the show I then do audience research and get their opinion of it. In the future, I plan to design a online rating board for anyone to give their view, but for now it will be good old fashioned word of mouth.

The origin of the Rage Scale comes from the times when you sat in front of your TV and ranted for an hour about how Jack could have got onto the wooden plank with Rose or how you wasted a couple of hours of your life knowing you won’t get it back.

If a rating is 70% or higher then the movie or TV show will get this TV icon to show it is rated “Raging”.

If a rating is lower than 70% then it will get this broken TV icon to show it is “Flat”.

For any TV series I review I add each percentage score from each season to come up with an overall score.

This new system of grading will allow me to tell you guys to not see this film/tv no matter what. The image below means that I think a film/tv show is a waste of time and doesn’t deserve views. 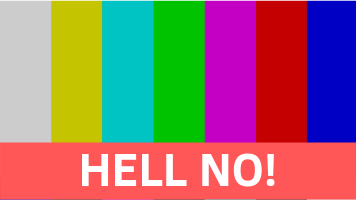